David has been married to his wife Alison for 25 years, and has three children. He currently works as a Shift Performance Manager in Passenger Service at Gatwick Airport. Previously, David served in the British Army in the Royal Engineers.

David has been a member of ADC since 2011 representing Felpham East. He sings in a tri called 'The Debonaires' and also appeared at the Conservative Party Conference in Birmingham in 2016. 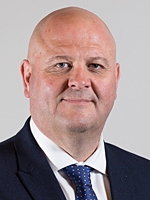